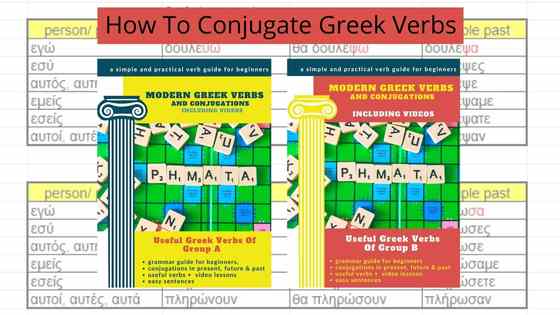 Greek Verbs for beginners are usually the verbs belonging to the  A, B1 and B2 Groups. You will hear this terms regularly, when you start learning Greek grammar.
Because, let’s be honest, speaking Greek without knowing grammar or how to conjugate your verbs, is simply impossible!
A verb is a central element in a sentence because nearly every sentence requires a verb. And therefore it is of major importance to learn how to conjugate your verbs correctly in Greek,  if you want to be able to communicate in Greek.

Below an intro for Beginners starting to learn Greek, or a good repetition for those learning Greek with language apps, which do not explain the structure of Greek grammar.

The infinitive of a verb

The basic form of a verb, as you find it in a dictionary or vocabulary-list,  is known as its infinitive.
In Greek, the “infinitive” is exactly the same as the verb conjugation in the first person.

For example;
έχω = to have = I have (infinitive , as you will find it in a dictionary)
So in Greek there is no “to have” form, but you start immediately with the conjugation of the 1st person, the “I have“form

καταλαβαίνω = to understand = I understand (infinitive, as you will find it in a dictionary)
To conjugate a verb, according to the “person/ personal pronoun”, the only thing you need to do is change its suffix (i.e. its ending after the “stem”).

Not sure what means “1st person” singular or plural?

Greek verbs, just like in English, French, German, Spanish, Dutch, etc… are conjugated according to the

When you start learning how to conjugate a verb for the right person, it is also good to know the “structure of different verb categories”

Why learning Greek verb conjugations is of major importance?

When conjugating a verb, for each person , either in singular or in plural, (see above) you need to use the distinguished ending.
Therefore, using personal pronouns before the verbs is NOT obligatory in Greek.
So, it is possible to say/write the personal pronouns, followed by the verb, as we do in English or other languages, but Greeks usually do not say/write those personal pronouns.
So,
“εγώ έχω” = “έχω” (I have)

This means that you will need to understand about “which person” somebody is talking or writing, by listening or looking at the ending (conjugation) of the verb.
It also means that you can easily have a miscommunication if you use the wrong conjugation/ending of the verb.

For example, If you want to say
“He wants…” but you say…θέλω (= I want) in stead of Θέλει = He / She wants
then there is a communication problem!

TIP; if you just started learning Greek, and you are not so confident in conjugating a verb correctly, then just use the personal pronouns together with the verb. That way Greeks will understand about “which person(s)” you are talking, even if you use the wrong ending of the verb.

IN GREEK, THERE ARE 3 DIFFERENT ACTIVE VERB GROUPS ; A, B1 AND B2

In general, when you start learning a language with language books, you usually start with learning the “infinitive” of the verb, and then the conjugation of the present tense. This is not only so for learning Greek, but for many other European languages as well.

In general, most Greek grammar books will mention three Verb groups, and when you understand which verb belongs to which category, you will be also able to conjugate most verbs. It is important to keep that structure in mind.

Conjugation GROUP A; includes verbs ending in: -ω
–> έχω (I have)
This is the biggest Verb group, and about 75 % of all verbs belong to this category

Conjugation GROUP B2; includes verbs ending in: -ώ
–> μπορώ (I can)

HOW DO YOU KNOW IF A VERB BELONGS TO THE A OR B GROUP?

When it comes to determining to which category each verb belongs, you need to notice whether the -ω at the end of the verb has an accent or not.
If there’s no accent mark, then the verb follows the Conjugation A model.
Otherwise, if the -ώ or -άω are accentuated, then they belong to the B group.

It is actually simple and the Greek grammar has a very nice structure.
Not knowing this structure will delay you in learning Greek, since you also need this basis in order to use the future and past tenses.

With this in mind, we created eBooks for Beginners, with many examples and videos.

Grammar is not that boring as you think 🙂  It is actually fun, and the better you know your verbs and the structure, the faster you will learn and the more you will love grammar !

If you are in the mood to start learning more, then take a look at both eBooks;

To purchase your eBook (PDF file which you can also print yourself) go to —>
https://masaresi.com/product/verb-ebook-category-a/ 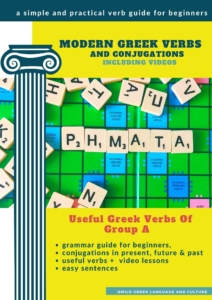 To purchase your eBook (PDF file which you can also print yourself) go to —>
https://masaresi.com/product/learn-how-to-conjugate-greek-verbs-b-category/ 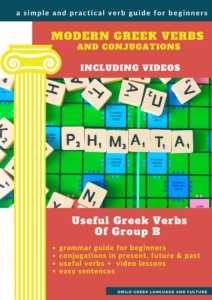