You first want to practice your Greek? Have a look at the ebook  “How to order coffee in Greek”! 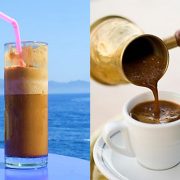