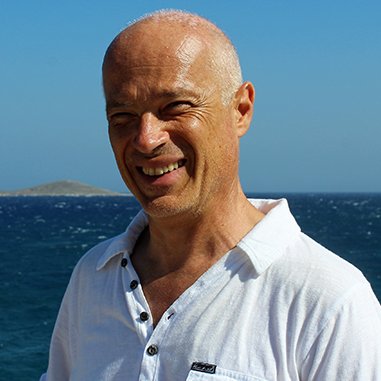 Founder and director of Omilo.
He was born and raised in Athens.

Dimitris has been involved with education and teaching for more than 25 years. Apart from his BA from the University of Thessaloniki, he obtained an MBA degree from Drexel University in the USA. Dimitris teaches primarily the advanced students as well as communication classes during the intensive courses between Easter and September. During the remaining months, he handles the organizational, financial and administrative aspects of the school. 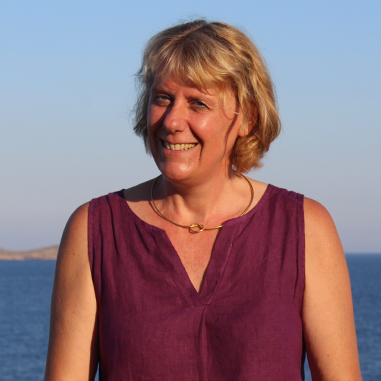 Co-founder of Omilo and Program Coordinator.
She was born & raised in Belgium and has been living in Greece since 1993.

Maya has a degree in “Translating and Interpreting” from the University of Antwerp, Belgium. After working as a language teacher and translator in various language schools in Belgium, Maya went to the U.S. for a Master’s in Arts Administration at Drexel University in Philadelphia. For one full year, she worked as the administrative assistant at Inlingua Language School in New Jersey. At Omilo, Maya is in charge of marketing, administration, the Omilo Newsletter, emails, the website, social media and cultural activities. She speaks Greek, English, German, French and Dutch. 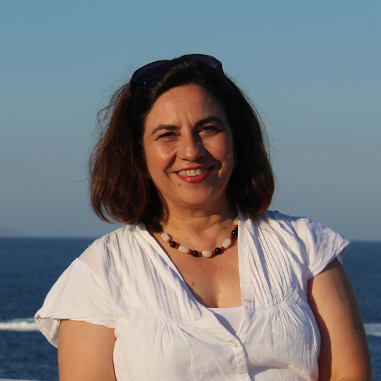 Full-time teacher at Omilo since 1998.
She was born and raised in Korinthos.

Marina is a graduate of the School of Philosophy, Pedagogy and Psychology at the University of Athens and received additional training in Adult Education and Intercultural Education as well as in Analysis and Management of Group Dynamics. Besides teaching, she is involved in developing course material for Omilo. She also trains new teachers and participates in Omilo’s cultural group activities. She speaks English, Spanish and a bit of German.

Marina is one of the authors of the Greek Language book Φύγαμε για ελληνικά! (Off we go to learn Greek!) intended for foreign students of Modern Greek who are at an intermediate language level. 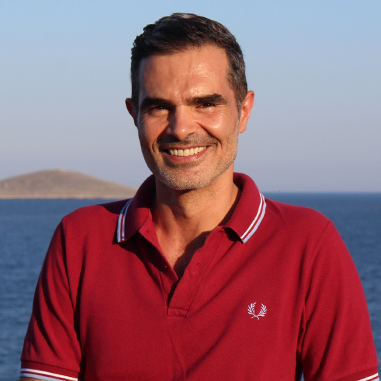 Full-time teacher at Omilo since 2005.
He was born and raised on the island of Crete.

Konstantinos is a graduate of the Aristotle University of Thessaloniki School of Philosophy and holds a Master’s degree in Applied Linguistics (University of Essex, UK). He has taught Modern Greek as a foreign language at the Hellenic Centre in London as well as at other educational institutions in the British capital. In addition to teaching, he is involved in developing course materials and guiding new teachers. Since 2007 he has been an oral examiner for the Examination for the Certificate of Attainment in Greek, organized by the Center for the Greek Language. He speaks English and a little German. 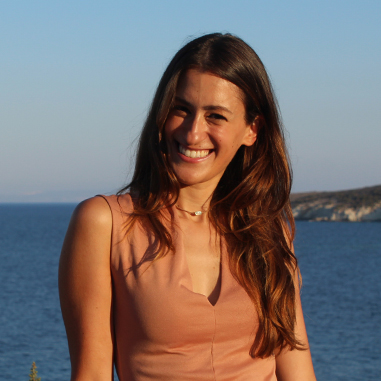 Part-time teacher at OMILO since 2011.
She was born and raised in Athens.

Terpsi studied Greek Philology at the National and Kapodistrian University of Athens School of Philosophy, during which time she attended a six-month program in Linguistics at the University of Salzburg in Austria. She holds a Master’s Degree in Theoretical and Comparative Linguistics (University of Grenoble 3, France). In addition to teaching Modern Greek as a foreign language, she also has experience in teaching modern and ancient Greek to youngsters in secondary schools. She speaks English, French and a little German.
Terpsi was working full-time at Omilo till 2020. After becoming a mother, she will work part-time for the time being.

Terpsi and Konstantinos Oikonomou, are the authors of the Greek Easy Reader Lydia: A summer in Greece! 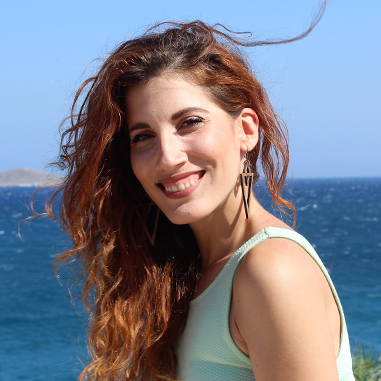 Full-time teacher at OMILO since 2018.
She was born and raised in Athens.

Eva studied Greek Classic Philology at the National and Kapodistrian University of Athens. After obtaining her degree, she continued with theatrical studies in Drama School in Athens. In addition to teaching Modern Greek as a foreign language to adults, she has experience in teaching Ancient Greek, History and Latin to high school students. From 2015 till today she also works part-time as an actress in theater. Apart from teaching, Eva helps Omilo with making language videos for the Omilo youtube channel. She speaks English and Spanish (and studied Korean for two years). She loves traveling, dancing Greek dances and Flamenco. 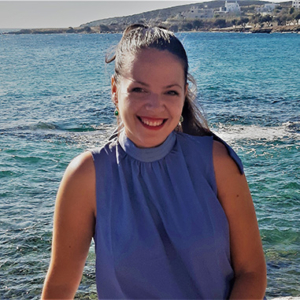 Part-time teacher at Omilo since 2021.

She was born in Lamia and grew up in the village of Giannitsou, in the prefecture of Fthiotida. She now lives in Athens.

Myrto graduated from the School of Philosophy of the National and Kapodistrian University of Athens (NKUA), majoring in Linguistics. She holds a Master’s Degree in Teaching Greek as a second/ foreign language (NKUA), for which she also received a scholarship for teaching the Greek language at the  Teaching Center of NKUA. Myrto has also experience in teaching Greek for the GYP TAMAM program (Language Support for refugee mothers), and for other online schools. She loves the multicultural environment and foreign languages. She was an Erasmus student in Sweden and speaks English, Swedish, Italian and German. Finally, in addition to teaching, she loves communication and creativity, which is why she is in working for the Public Relations and Marketing of citycampus.gr, as well as the (volunteer) General Manager of studyabroad.gr.
She is very enthusiastic to also teach at Omilo where, in addition to teaching, she helps with creating educational material.

The Omilo staff works together with the teachers to help students make as much progress as possible. They test new students to make sure they are placed in the correct level; they offer help and advice to students who need it; they put together enjoyable extra-curricular activities. The staff also takes care of answering emails and phone calls as quickly as possible. Moreover, they write articles for the Omilo Blog as well as for the newsletters. Apart from helping students, the staff members are also responsible for the website and social media. They speak various languages and have a shared passion for language learning.

Part-time freelance Administrative Assistant
She was born & raised in Greece, by a Dutch mother and Greek father.

Administrative Assistant for various projects at Omilo.  She speaks Greek, English, and a bit of Dutch 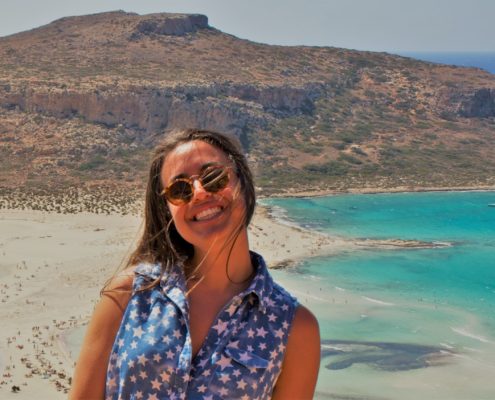 Katerina was born and raised in Athens and has been living in London since 2016. She is a graduate of the University of Mainz, Germany, and holds a Master’s degree in Translation and Interpreting Studies from the University of Manchester, UK. In addition to working as an account manager in a marketing agency, she freelances as a translator from English and German into Greek. Since 2020 she also works as a freelancer for Omilo.
At Omilo, Katerina works together with Maya, writing articles for the newsletter and blog. She’s a voracious book reader and a blogger at Kate Flâneur.