In which countries you can hear people speaking Greek, except of Greece and Cyprus? For sure in Southern Italy! Read the whole story below, see a documentary and listen to a song in Grico.

The inhabitants of the southern tip of Puglia and the region of Salento speak the Southern Italian dialect, which is called “Grico” or South-Italian.
In 1999 the Italian parliament recognized the Graikaniki community of Salento as “Greek national and linguistic minority”. The Graikanoi themselves (inhabitants of Greek-speaking villages) say that on paper they are Italians and Greeks at heart.

There are several theories about the origin of Griko. According to mythology, the first Greeks came to Salento after the fall of Troy, led by the legendary king of Crete, Idomeneas.
According to the prevailing theory, the dialect is derived from the Doric dialect of Ancient Greek. The presence of the Greeks in southern Italy goes back to the 8th century BC. In the 8th century BC, Dorians, Chalcis, Cretans Messinians etc. founded cities in South Italy, bringing along their language and culture. Since then, the area is called “Great Greece”.

Another theory says that the dialect comes from the Byzantine settlers in the 9th century AD. There are insufficient data to determine with certainty the origin of the dialect. But regardless of the exact origin, the inhabitants of these villages say that Greece is the “Mother.”

Until the Second World War, the residents only spoke Griko. The dialect was maintained through oral tradition, as the inhabitants were illiterate shepherds and farmers who were cut off from the outside world.
After the war, Italian was introduced as an official language in schools and consequently dominated the dialect, with as a result that today only elder people speak the dialect in everyday life. Since 1999 (when recognized as a minority language), the Griko began to be taught in local schools again. This way, children keep their bonds with Greece and many young people seek their Greek identity and roots.

Several attempts to rescue the language have been made. There is for example a cultural association called “Stars”. Through songs, dance, poetry and other activities, the association is trying to keep the dialect and culture alive. It is also characteristic that some people, even now, are still writing songs and poems with lyrics and verses in Griko.

Do you want to know more?
Sophia Papaioannou and her team present a video about the Greek-speaking villages of southern Italy, full of emotion and an inexplicable nostalgia for the Greeks. A documentary about the history of a lost language and traditions. It would be a shame to let them disappear, after so many centuries.

Below you can listen to traditional song of Southern Italy. The song is performed by Alkinoos Ioannidis and the band Encardia. Can you understand some Greek words? 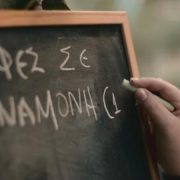 How to order coffee in Greece?
Scroll naar bovenzijde