Lydia: A Summer In Greece!

(Also a companion workbook and verb-book available. Read more below) 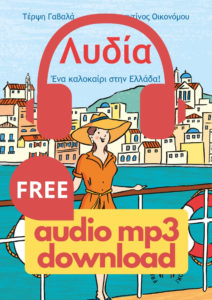 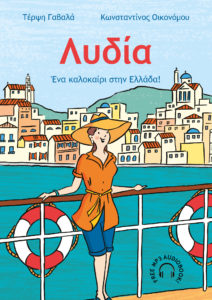 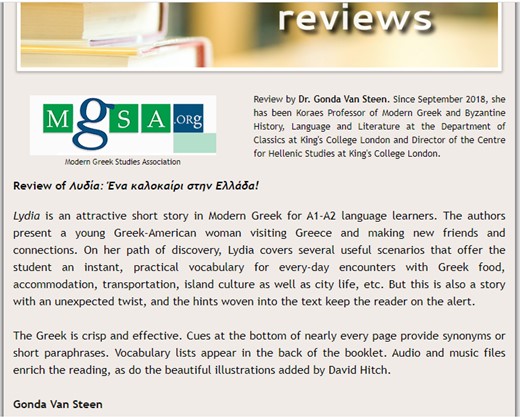 In the video below you will see the authors
Terpsi and Konstantinos, on the island of Syros,
where also the „Lydia-story“ takes place 🙂

Read and listen to the short story Lydia: A summer in Greece! and learn Greek in the most fascinating way!

The story is written by the Omilo teachers  Τέρψη Γαβαλά and Κωνσταντίνος Οικονόμου, (in the photo above) and includes an Audio, as well as a vocabulary list in English!

Are you in the early stages of learning Greek or do you just want to brush up on your colloquial Greek? Do you feel like having a break from studying Greek formally with course or grammar books? Then here is the book you are looking for! A real story, which will give you the opportunity to learn or revise Greek in a relaxing and pleasant way!

Lydia: A summer in Greece!

Read and listen to the short story, written especially for Beginner learners of Modern Greek (at Α1 / early stages of A2 level, as defined by the Common European Framework of Reference for Languages, CEFR).

The main character of the story is Lydia, a Greek–American woman. She lives in New York and works as a journalist for a Greek newspaper. She often travels to Greece to cover different stories. On one of her trips to Athens, she meets a man, Orestis, on the plane. He volunteers to help her with an article she is writing about Athens’ neighborhoods. After they spend some time together in the Greek capital, Orestis asks Lydia to join him on a business trip to the island of Syros, in the Cyclades. The beautiful island of the Aegean Sea becomes the setting for a series of unexpected events. And secrets are about to be revealed…

The book will help you:

• Plenty of dialogues covering a great variety of everyday topics, such as:
Introducing myself / Talking about my family / Ordering in a coffee–shop or a tavern / Arranging a meeting with friends / Asking for or Giving directions / Hobbies / Shopping / Travelling / Describing a city / Clothes, etc.
• Short, easily–manageable chapters
• Illustrations at the start of each chapter that show the reader clearly the essential elements of the story which follows
• Footnotes with explanations of words in Greek
• Footnotes with synonyms of words
• Footnotes with the Present Tense of verbs found in the text in other tenses
• An Audio with all of the story, recorded by native Greek Speakers
• A selected vocabulary from each chapter translated into English 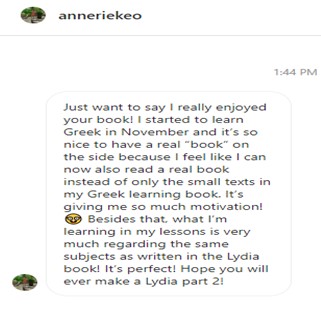 For your info, the book comes with an English vocabulary list.
However, the vocabulary is also available in French, German and Turkish, and for sale online at :
Click here for the Vocabulary in French
(For the French speakers, also more info in French at
https://vivreathenes.com/livre-pour-apprendre-le-grec.html)

A.  Companion Workbook to the Greek Easy Reader

The workbook, exactly like the easy reader, consists of 12 units. Each unit has 6 exercises

Click here for info or buying the Companion Workbook

B.  71 everyday Greek verbs in the Present, Future, and Past Tenses.
Learn the verbs used in this story in the present, future and past tense
You can use this verb book by itself, but you can also use it in combination with the Easy Reader ‘Lydia – A summer in Greece!

Click here for info or buying the Verb Book

About the MP3 Audio-book (included with your order of the book):
Listen to the story, recorded by native Greek speakers, and improve your listening skills.
Original melodies for the story were composed by talented musician Issidoros Papadakis. In addition, two great musicians, the bouzouki master Petros Kapellas and Yannis Varthalitis (guitar), played a taqsim (a piece of improvised folk music) that was recorded on the island of Syros – right next to the sea – and then included in the story.

Many special thanks to Omilo colleague Εύα Χριστοδούλου, for her main role as Lydia in the Audio recordings, as well as for the musicians Issidoros Papadakis and Petros Kapellas.
The authors would also like to sincerely and wholeheartedly thank everybody who participated in the recording of the story – technicians at Artracks Recording Studios in Athens and readers – for their great enthusiasm, patience and commitment.

The book Lydia: A summer in Greece! can be used either in the classroom as supplementary material or for self–study.

Read below what one of the readers writes: 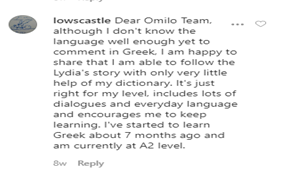